How to Reduce Frown Lines

Lose the 11s on your forehead

Frown lines appear between the eyebrows and give an angry or sullen appearance to the face. Botox can be used to reduce their appearance and lift the forehead and brow area.

Our team’s results with the reduction of frown lines speak for themselves. Get in touch today to find out more.

Fill in your details below and we’ll be in touch to arrange a consultation.

EXCELLENT Based on 139 reviews.

Patriciat3 Paynter 9,
Verified
I had a great experience there. Staff were friendly and welcoming. It made me feel relaxed when I felt genuinely anxious about receiving a treatment. Dr Aesthetica explained everything really clearly to me, putting my mind at ease. I had a tear trough filler and it took 10 years off me. I was very pleased with the end results. Would highly recommend their service! Patricia

sonia kaur
Verified
My experience at Dr Aesthetica has been amazing and exceeded my expectations, there is nothing I would change. Both kiran and Steph have been amazing and professional with helping me on my acne journey and building my confidence. I can not thank them enough. I can always rely on this clinic for the best advice and service.

Jann Robinson
Verified
I had a great hour of treatment using fillers and Botox Dr Farmah is a very personable man and makes every effort to put one at ease His treatment is very gentle and he explains everything as he goes along I found he was very careful to make the treatment suitable for me and my face shape I have had experience of a number of clinics in London and I find Dr Farmah equal if not better I am really happy that I found the clinic. I like the fact that it has car parking outside because after any clinic visit I only want to get in my car and drive home I wish Dr Farmah and his staff every success.

Rachel Weinman
Verified
I had my first non surgical rhinoplasty by Dr Farmah, he was brilliant and very professional. I went back twice so he could do more treatment to correct my nose to make it just how I wanted it to look. I felt really happy and satisfied in the end. I also had my chin reshape and botox by him, very happy with the results and how he treated me as patient. 100% recommend Dr Farmah :0)

Josh Edgington
Verified
If you’re looking to have a cosmetic procedure in Birmingham then I cannot reccoment dr aesthetica enough. The entire place is both clean and welcoming. Staff are professional, honest and put you at ease. Dr Farmer himself is extremely knowledgable both medically and cosmetically and I quickly felt I could completely trust him. Aftercare advice is also very good. As for the cosmetic itself, I have felt so much more confident in my looks since being treated at Dr Aesthetica

Do you have wrinkles between your eyebrows?

What are Frown Lines?

Frown lines are vertical lines or wrinkles that appear between the eyebrows.

Frown lines often appear shaped like the number '11' furrowed between your eyebrows. They are usually two prominent wrinkles stemming from the brow up into the forehead surrounded by some smaller wrinkles.

How do Frown Lines form?

Also commonly referred to as 'worry lines,' the leading cause of frown lines is ageing. As we get older, our skin loses elasticity and doesn't easily bounce back to its original shape. Coupling this with repeated facial expressions that contract the muscles between the eyebrows and cause the skin to gather increases the likelihood of getting frown lines.

But they can also develop in younger adults who have had to deal with too much stress, which causes a lot of facial tension. Other factors that can make you more susceptible to frown lines include excessive sun exposure, smoking and genetics.

It’s also worth noting our technology usage has increased leading us to concentrate more on digital devices. This action often leads us to frowning without even realising. 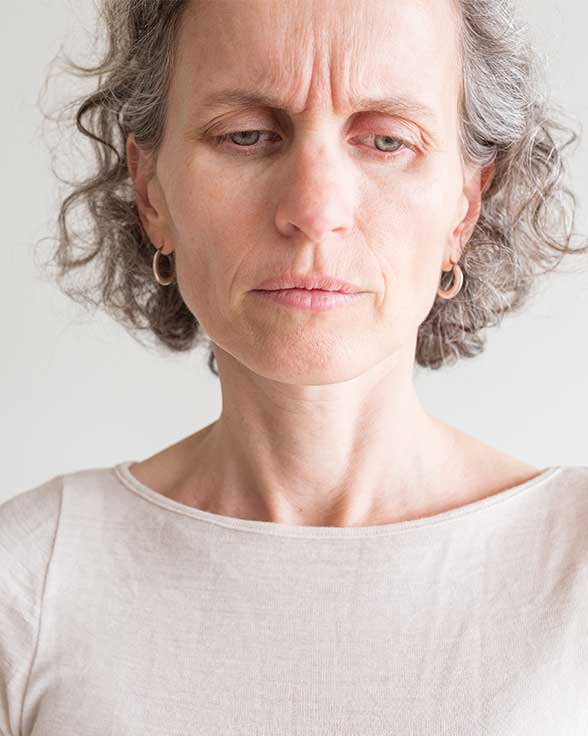 Botox® (Botulinum Toxin) is an effective non-surgical way to smooth out wrinkles and fine lines and works by temporarily blocking nerve signals and muscle contractions. In the case of Frown lines, it's injected in the area between your eyebrows where the wrinkles sit – creating a smooth and flawless effect. The results of treating frown lines with Botox are unbeatable in comparison to other options.

How do I know I need treatment for Frown Lines?

Do you feel self-conscious about any wrinkles or fine lines between your eyes? Are you constantly getting comments from friends or family saying you always look tired or stressed? Then this could be the perfect treatment for you.

How do I get rid of my frown lines without surgery?

Our Frown Lines treatment using Botox can smoothen out your frown lines without the need for any surgery whatsoever. In fact, you could be back at work the same day with a clean and 'stress-free' look. Botox injection is minimally invasive and is considered a safe, effective treatment for fine lines and wrinkles between the eyebrows.

Frown Line treatment tends to last between 3 and 6 months, but it may last longer depending on your skin's natural genetic make-up. Then a follow-up treatment will be needed to keep the wrinkles at bay.

What else do I need to know?

An average appointment for this treatment usually lasts around 30 minutes. You will start to see results in a week, and then optimal results can usually be seen in 2 weeks from the day of the treatment. Also, it's worth noting that frown line treatment is generally pain-free, although, of course, there is an option for using numbing cream on the area. Side effects include bruising, swelling, and bleeding, but these tend to be very rare.

A very popular treatment at Dr. Aesthetica, Botox® (Botulinum Toxin), is used to smooth out frown lines between your eyebrows and decrease the tired or worried look associated with this condition.

While getting older is unavoidable, frown lines don't have to be.

We value understanding you better, so walk through our doors and tell us your story… and let us turn it into one of happiness, confidence and empowerment.  Because why would you have it any other way!?
Book Now

We want to empower everyone who walks through our clinic doors, to be able to look in the mirror and see a happier, brighter version of themselves.
More InfoBook Now
Dr Aesthetica, Unit 1, 1431 -1433 Bristol Rd S, Birmingham, B31 2SU
Main Navigation
Conditions
Treatments
Pricing
Tel: 0121 769 0242
Email: [email protected]
Privacy Policy | Terms and Conditions

Stay up to date with our latest treatments and skincare guides.