A weak or recessive jawline can give an undesirable appearance, with dermal filler we can define the area with more volume, giving instant results.

If your weak or receding chin is making you unhappy, you don’t have to put up with it. Our medically led team works based on your unique facial anatomy to give you instant definition and results. Get in touch today.

Fill in your details below and we’ll be in touch to arrange a consultation.

EXCELLENT Based on 139 reviews.

Patriciat3 Paynter 9,
Verified
I had a great experience there. Staff were friendly and welcoming. It made me feel relaxed when I felt genuinely anxious about receiving a treatment. Dr Aesthetica explained everything really clearly to me, putting my mind at ease. I had a tear trough filler and it took 10 years off me. I was very pleased with the end results. Would highly recommend their service! Patricia

sonia kaur
Verified
My experience at Dr Aesthetica has been amazing and exceeded my expectations, there is nothing I would change. Both kiran and Steph have been amazing and professional with helping me on my acne journey and building my confidence. I can not thank them enough. I can always rely on this clinic for the best advice and service.

Jann Robinson
Verified
I had a great hour of treatment using fillers and Botox Dr Farmah is a very personable man and makes every effort to put one at ease His treatment is very gentle and he explains everything as he goes along I found he was very careful to make the treatment suitable for me and my face shape I have had experience of a number of clinics in London and I find Dr Farmah equal if not better I am really happy that I found the clinic. I like the fact that it has car parking outside because after any clinic visit I only want to get in my car and drive home I wish Dr Farmah and his staff every success.

Rachel Weinman
Verified
I had my first non surgical rhinoplasty by Dr Farmah, he was brilliant and very professional. I went back twice so he could do more treatment to correct my nose to make it just how I wanted it to look. I felt really happy and satisfied in the end. I also had my chin reshape and botox by him, very happy with the results and how he treated me as patient. 100% recommend Dr Farmah :0)

Josh Edgington
Verified
If you’re looking to have a cosmetic procedure in Birmingham then I cannot reccoment dr aesthetica enough. The entire place is both clean and welcoming. Staff are professional, honest and put you at ease. Dr Farmer himself is extremely knowledgable both medically and cosmetically and I quickly felt I could completely trust him. Aftercare advice is also very good. As for the cosmetic itself, I have felt so much more confident in my looks since being treated at Dr Aesthetica

What is a Weak/Receding Chin?

A weak chin, also known as a receding chin, is a condition where your chin appears less defined (the tip of the chin is not projected forward enough in relation to other parts of the face). In many cases, the chin looks like it’s ‘sloping’ into the neck.

Since the chin takes up around a third of the facial area, it significantly impacts a person’s overall facial aesthetic, and a weak chin can make the entire face look imbalanced. As a result, this makes many people self-conscious and wary of how they are perceived during social interactions. On the other hand, a well-defined chin is highly desirable and considered to be one of the standards of youth and beauty.

Is a Weak Chin Genetic?

Ageing - results in the breakdown of collagen and elastin fibres in the skin, causing a decrease in the definition of the chin and jaw.

Overbite - can also cause the lower jaw to be positioned too far back and lead to a weak chin over time.

How Do You Treat a Weak Chin?

Traditionally, for chin enhancement, patients had to look at surgical options. But the use of non-invasive Dermal Fillers now gives excellent results at a much lower risk and cost. The latter is our preferred treatment option for a weak or receding chin. Our dermal fillers are made of hyaluronic acid (a naturally occurring substance in the body responsible for keeping the skin’s hydrated and plump). Popularly known as Chin Filler, this treatment offers a quick and painless way to adding shape, definition and smoothness to the chin and jawline area. The entire treatment takes only a few minutes and can be carried out over a lunch break.

What are the Benefits of Treatment Option for a Weak Chin?

Results will be more-or-less instant, with the final effect being seen within 14 days as the filler settles and integrates with the skin’s tissue. The filler will produce a subtle but significant impact on your chin profile. In fact, it will be difficult for others to pinpoint where you had some work done—great news for those who want an enhanced but natural look. The results typically last for around 12 months but potentially up to two years. If, for whatever reason, you regret the enhancement, it will fade away within a year or can be immediately reversed with Hyaluronidase.

How Do I Know If I Need Treatment for My Weak Chin?

Chin fillers are suitable for men and women over 18 years who want to change their chin’s shape without surgery. People seek enhancement of their chin and overall lower face for several reasons. Some have a receding chin and want to achieve the appearance of a strong jawline. Others are concerned about the effects of ageing on their facial features, while others want to get rid of their cleft chin (chin dimple or bum chin). Our chin filler treatment offers the perfect alternative to risky options such as chin implant surgery while taking into account your specific concern. Correcting a weak chin can also improve your jawline definition, bringing about a more masculine appearance in men and a softer, more balanced lower face in women.

Chin fillers are less costly and complication-prone than surgery. They also have along proven track record of safety. That’s why more people are opting for dermal fillers over surgical interventions. When done correctly, the result is a more proportional and pleasing appearance. That’s why it’s vital to only work with a licensed and experienced aesthetics doctor. At Dr Aesthetica, we have successfully performed thousands of chin filler treatment. Talk to us today for a personalised treatment experience. 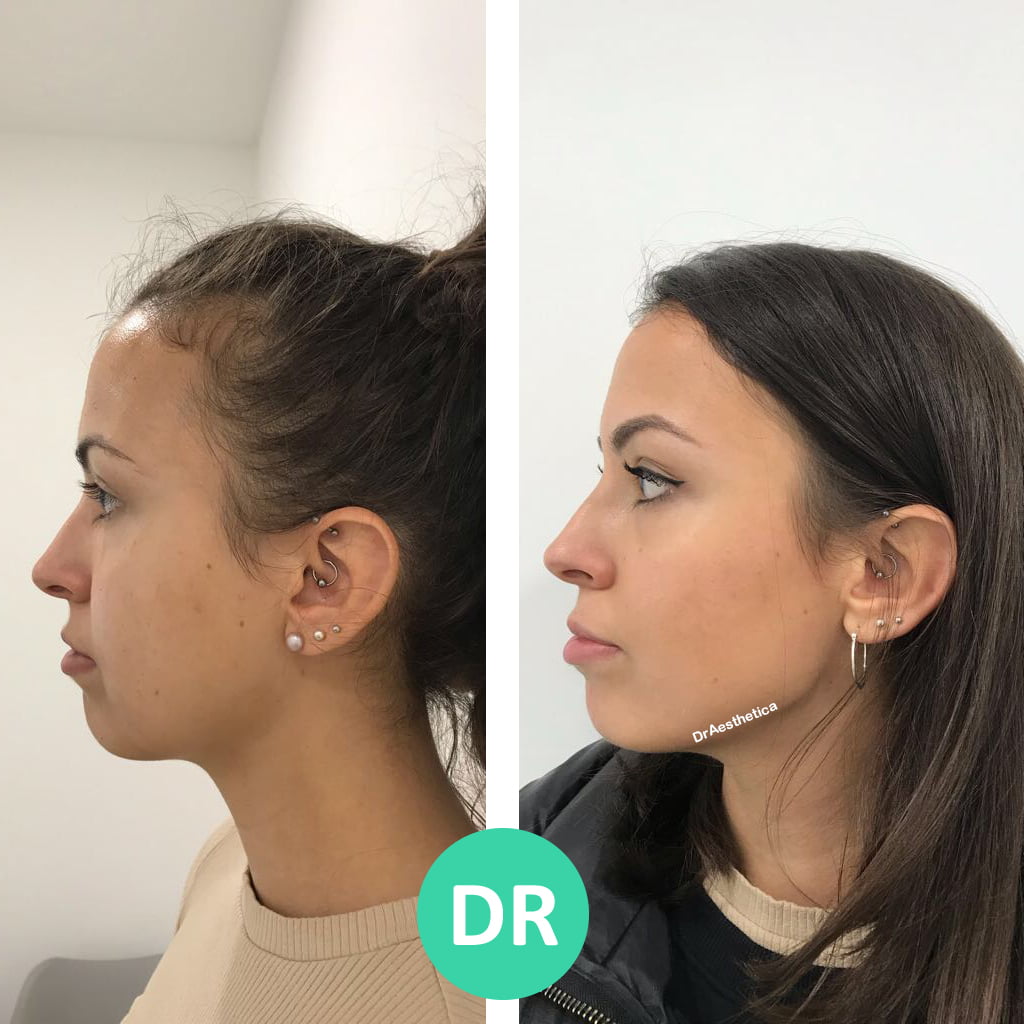 We value understanding you better, so walk through our doors and tell us your story… and let us turn it into one of happiness, confidence and empowerment.  Because why would you have it any other way!?
Book Now

We want to empower everyone who walks through our clinic doors, to be able to look in the mirror and see a happier, brighter version of themselves.
More InfoBook Now
Dr Aesthetica, Unit 1, 1431 -1433 Bristol Rd S, Birmingham, B31 2SU
Main Navigation
Conditions
Treatments
Pricing
Tel: 0121 769 0242
Email: [email protected]
Privacy Policy | Terms and Conditions

Stay up to date with our latest treatments and skincare guides.